From waste to resource thanks to characterization of waste streams

Today, waste recycling is high-tech and much-needed. A smart characterization technology now makes it possible to classify in detail what appears as a homogeneous waste stream on the fly at an industrial level. 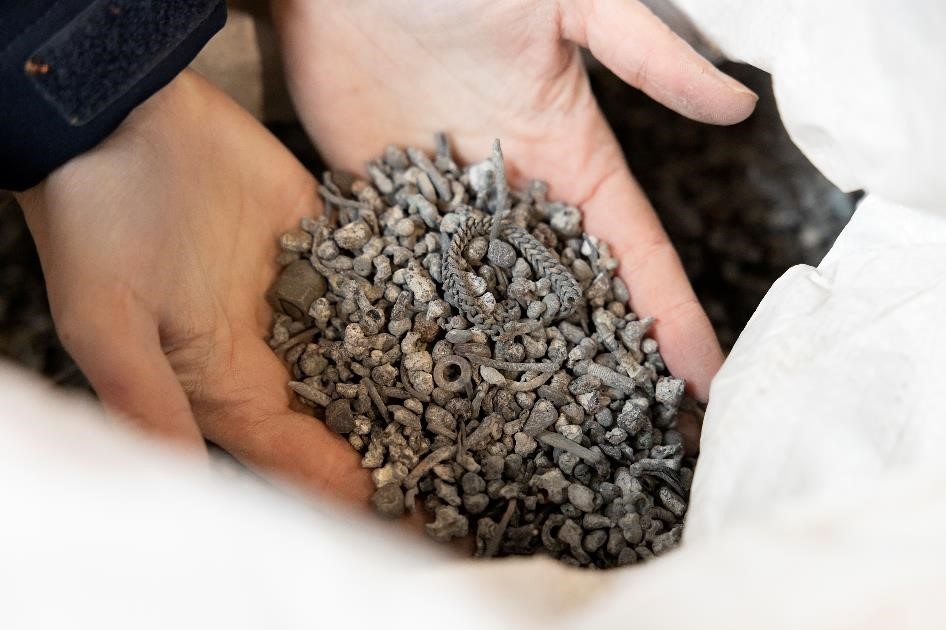 Ghent University and VITO are taking the next step towards an efficient characterization of waste, also for metal recycling. This Characterize-to-Sort technology makes it possible to automatically determine important physical parameters of all waste particles (not just sub-samples). With sensors the seemingly homogeneous waste stream is scanned and classified down to the level of each individual particle. The innovative technology concept was conceived by VITO and developed from the start in close collaboration with Ghent University. Both research partners have now successfully concluded a two-year collaborative project. With the support of EIT Raw Materials, they continued to develop and scale up the technology during this period together with two industrial partners, Suez and Umicore. The result is a multimodal, sensor-based solution powered by artificial intelligence. The team has successfully realized an industry-relevant throughput of complex waste streams on the fly for two different waste streams. This is an important milestone for VITO in bringing the technology to the market.

Waste as a resource

‘We call it waste, but, honestly, this is material that we can use to the maximum, down to the last gram. And we will need every gram of raw material, especially valuable metals,' says Kris Broos of VITO. ‘And it is a valid question from companies as well: does my waste stream still contain some value? Because it can comprise all kinds of materials: some copper, some metal, precious minerals … but you often don't know what's actually in it. As a result, you can't determine the value,' Kris Broos continues. In the metal recycling sector, for example, labor-intensive sample collection and subsequent expensive chemical analyzes are the main bottlenecks. This leads to long waiting times (often several weeks) and financial uncertainty for recycling companies. To counter this, VITO developed a smart characterization technology. This ‘Characterize-to-Sort'-technology makes it possible to find out which raw materials the last remnants of, for example incineration residues (bottom ashes) contain, and to determine the value of these waste streams. ‘We wanted to examine directly the entire waste stream, identifying each individual particle,’ says Broos. ‘In this way we generate knowledge that we can apply immediately, unlike traditional sample collection. In collaboration with Ghent University spin-off XRE, we developed a first prototype of a conveyor belt on which three sensors – a color camera, a 3D camera and an X-ray sensor – capture the color, shape and internal chemical structure of each waste particle. By linking the signals from those three sensors to a large AI brain, you can measure and predict various important physical parameters of each particle: size, mass, shape, material, texture, etc.’ ‘Because you map out so many parameters over time – about 300 per particle – you can create a digital twin of your waste stream. You can use that information to conduct experiments in the digital world. This way you not only gain insight into the materials that are in your waste stream, but you can also determine the value and quality of the waste and simulate new recycling processes.’ 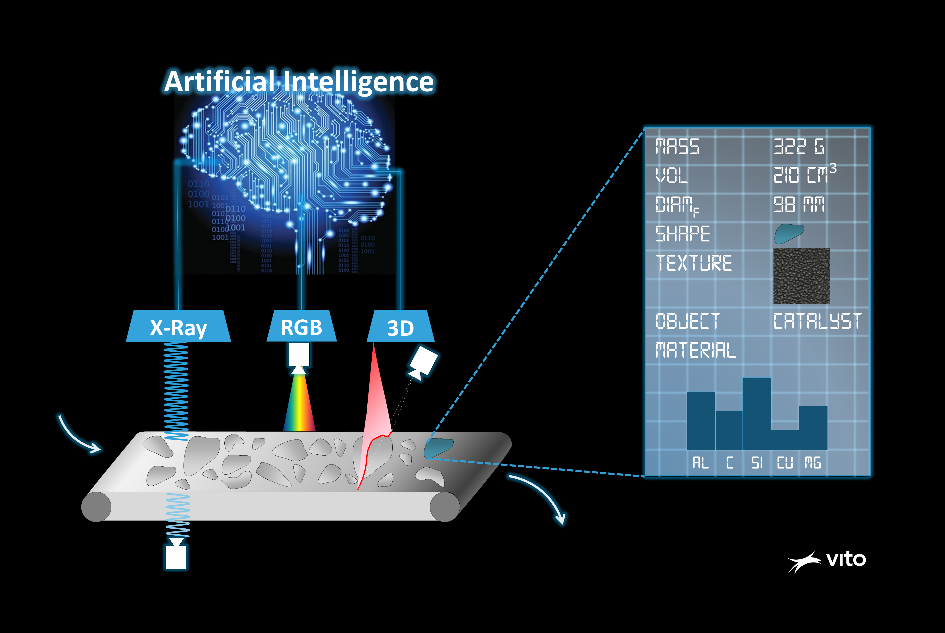 ‘Where we were initially able to prove that the characterization technology works for bottom ash, it now came down to scaling it up to industrial level.’ Or to stay in the world of waste processing: from the level of the waste bin to that of the waste truck. In order to realize this upscaling, VITO has been working together with Ghent University and two industrial partners, Suez and Umicore, in CHARAMBA for the past two years. This project is supported by European funding from EIT Raw Materials. This part of the European innovation policy supports good ideas and innovations to bring them to the market and thus bridge the so-called 'valley of death’. ‘From the start of the project, we worked closely with Ghent University. For example, for the construction of the prototype we collaborated with Ghent University spin-off XRE and the Ghent University research group UGCT (Centre for X-ray Tomography) gave us insights into the interaction between waste and x-rays. But the QUASAR technology of Ghent University also offered great added value in this upscaling phase. The characterization has to be done on a conveyor belt that rolls at real, industrial speed. Therefore, the sensors must be able to analyze the waste streams quickly enough, just like the software and algorithms have to process all measurements within a few seconds. The faster you can process data, the more waste you can characterize in a short time. Working faster also means quicker calculations, so we had to optimize the processing speed of the algorithms.’ ‘By loading the critical part of the processing chain onto GPU, a graphic processing unit, the processing speed is 133 times faster compared to a CPU-only implementation, a central processing unit. This speed essentially allows the conveyor belt to run at a much higher speed, saving time and energy while maintaining the same high level of characterization performance,’ explains professor Bart Goossens, inventor of QUASAR and together with Professor Wilfried Philips Ghent University team leader of the research group Image processing and interpretation. ‘At the same time, we optimized the technique to be able to separate different particles from each other on the basis of images from an X-ray sensor. The difficulty here is that particles can overlap on a conveyor belt, making it more difficult to separate them in the images. With AI we were able to locate and distinguish particles from each other, which means that the system can now indicate very clearly which materials your waste contains.’ Two large-scale demo events recently showed that the technology has successfully scaled up from scan-the-bucket to scan-the-truck. VITO was able to demonstrate the industrial relevance of the new characterization technology for various metal-rich material streams. After completion of the project, VITO aims to market the innovative technology as a service and then launch a spin-off that sells tailor-made in-line characterization equipment to various players in the metal recycling market. ‘By valorizing end-of-life waste streams, not only valuable materials are recovered to create value, but we also reduce our dependence in Europe on primary raw materials,’ says Broos. ‘If you also know that the recovery of aluminium, for example, requires 95% less energy than for primary production from bauxite, then every kilo matters,’ adds Karen De Boeck of SUEZ. ‘And on top of that, you also have to landfill less,’ says Broos. So the environment is the big winner.